Prostate cancer is very common and results in the death of many men in the developed world. Prostate cancer that has not spread outside the prostate can usually be cured by surgical removal of the prostate gland (radical prostatectomy or RALP). Radical Prostatectomy can be associated with urinary incontinence due to damage to the involuntary sphincter and erectile dysfunction due to damage of the nerves that run within the outer coverings of the prostate. Surgical sparing of these nerves to preserve quality of life may risk leaving cancer cells behind often meaning that the patients need extra treatment with radiotherapy.

The NeuroSAFE trial is designed to evaluate a new method designed to decrease the risk of compromising cancer control associated with sparing of the nerves as well as evaluate effects on the need for radiotherapy after surgery if cancer is left behind. We will also evaluate effects on the quality of life in patients who have undergone RALP. The trial is needed now because the nature of prostate cancers treated surgically is changing rapidly. The techniques developed in low risk cancer to spare the nerves which run alongside the prostate, may not necessarily be safe when used on the more aggressive cancers we operate on nowadays and if they are adopted without adequate investigation, the risk is that patients will be exposed to increased risk of cancer recurrence and needing extra treatment with radiotherapy with consequent side effects and extra cost to the NHS.

On the outside of the prostate, within its outermost coverings, run the nerves thought to be responsible for producing erections. Preservation of these nerves has also been linked to a more rapid re-establishment of urinary continence following surgical removal of the prostate. Robotic technology has been developed which allows the prostate to be removed through very small incisions. The surgeons view is magnified in 3D, which facilitates the peeling off of the outer layers, containing the nerves (so called nerve sparing). With nerve sparing the nerves controlling erections are left intact whilst the prostate itself, along with the cancer within it, is removed.

This increases the patient’s chances of getting erections of sufficient quality for penetrative sex. Data from several case series, including our own, suggest that the higher the degree of nerve sparing performed, the more likely a patient is to be potent and continent of urine.

Nerve sparing has largely been developed and the effects have been evaluated in the USA where prostate cancer is detected at an earlier stage because PSA screening is performed commonly. In the UK, where PSA screening is not commonly carried out, tumours resected at surgery are larger and more aggressive, often having spreadthrough the capsule of the prostate. In addition, the move away from surgery for small low‐grade tumours in the UK means that the prostate cancers treated by surgery are larger and more aggressive overall. This means that the tumours are closer to the outer limit of the prostate because the more aggressive tumours tend to work their way out through the outer capsule of the prostate. A nerve sparing approach is associated with an increased risk that tumour will be left on the surface of the resected specimen. This is referred to as a positive surgical margin (PSM). One of the principles of (radical) cancer surgery is that cancerous tissue should be removed with a covering of non‐cancerous tissue to give the best chance of cure (a so called negative or clear surgical margin). Positive surgical margins are associated with an increased chance of recurrence following surgery and require further treatment, usually with radiotherapy, which is expensive and engenders its own side effects. 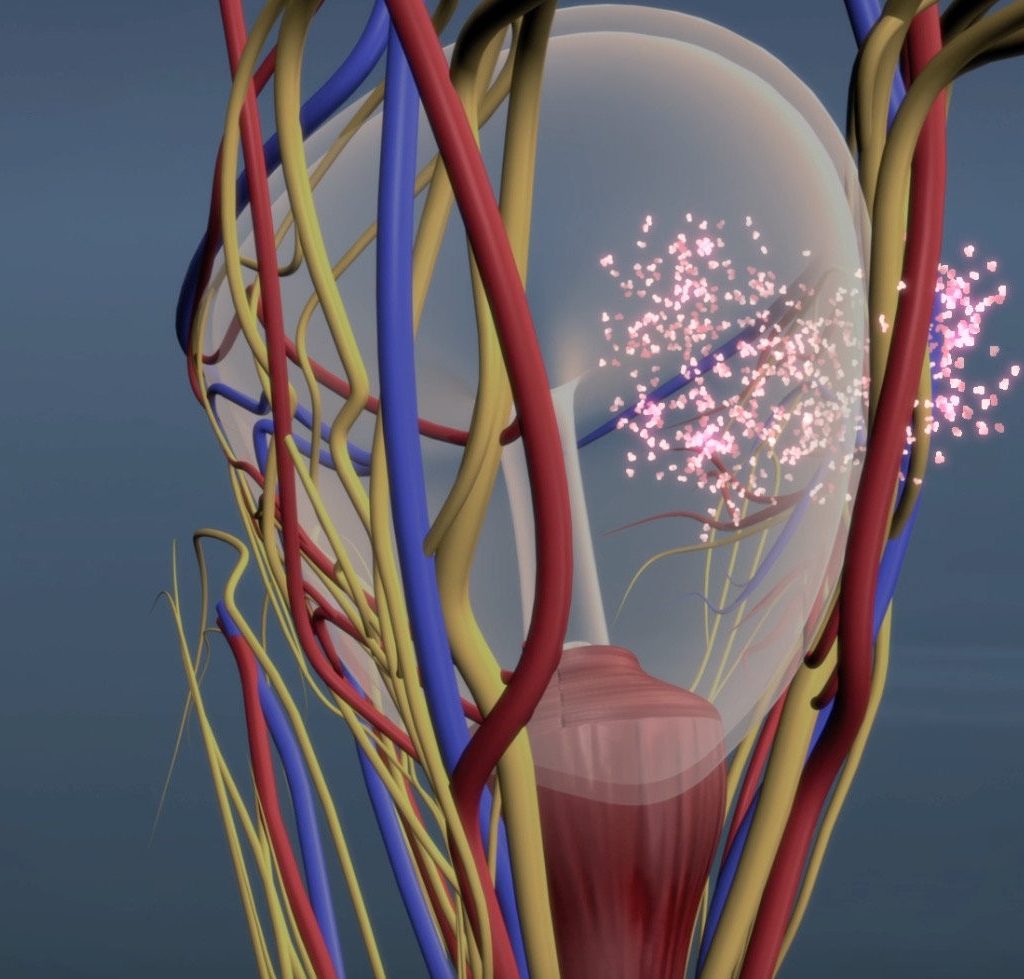 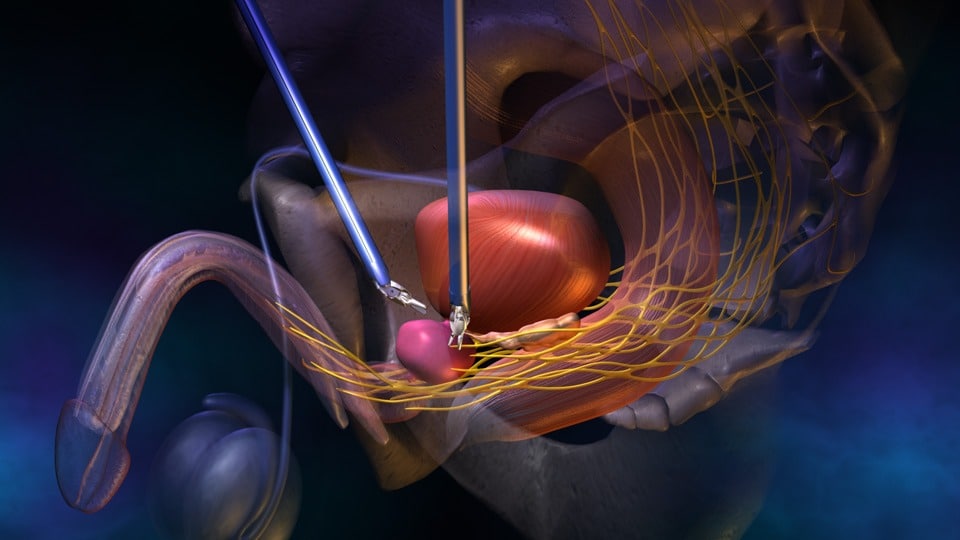 We plan to evaluate the use of a modified version of a frozen section technique called NeuroSAFE in promoting nerve sparing without diminishing the oncological effects of surgery by generating PSMs.

During this frozen section technique, once the prostate is removed, the areas of prostate adjacent to the spared nerves are sliced from the surgical specimen and rapidly frozen and stained so that they can be examined carefully by a pathologist. If the pathologist identifies a positive surgical margin, the spared nervous tissue on that side will be surgically resected before the patient is woken up at the end of theoperation. When this is done the cancer behaves as if it had been resected with a negative surgical margin at the outset.

Frozen section analysis does not add much time to the surgical procedure, as once the prostate is removed, the rest of the operation (joining the bladder to the urethra and removing pelvic lymph nodes) can proceed whilst the frozen section analysis is performed. Patients enrolled to the trial will be randomised between A) standard UK nerve sparing practice, wherein the degree to which the nerves can be spared is determined by the operating surgeon based on clinical examination, biopsy results and multi‐parametric MRI and B) bilateral nerve sparing with frozen section analysis. We recently surveyed UK robotic prostatectomists and confirm that currently UK surgeons predominately rely on MRI, biopsy and Digital Rectal Exam (DRE) findings to determine whether they can spare nerves, but that there is little consistency in the means by which a surgeon decides whether or not they can spare nerves in a particular case. Our survey tells us that UK surgeons do not use frozen section to direct nerve sparing with only 5% of UK prostatectomists ever having used it at all.

What are the potential outcomes of this research?
This trial will provide a thorough evaluation of a new technique designed to minimise the occurrence of PSM and exposure to extra treatment or cancer recurrence. It will generate vital data regarding the cost/benefit of using this procedure. The relationship between the degree and frequency of nerve sparing on quality of life will be evaluated in terms of sexual potency and urinary continence in UK patients undergoing RALP. The assessment of these functions will include patient reported outcomes.

In summary this trial will test whether this new surgical technique can be used to make surgery safer and more effective whilst allowing improved quality of life for patients having surgery for prostate cancer. If the technique is proven effective we will use the experience gained to promote its use throughout the NHS through training courses and publication and dissemination of the resultant data. Staff from centres participating in this trial will be fully trained in the NeuroSAFE technique.

A patient and public involvement afternoon was held for participants of the NeuroSAFE PROOF feasibility study, family members, men with prostate cancer, and staff members at UCLH. The event was supported by the charity Orchid Cancer appeal. The high levels of attendance was demonstrative of the support within our patient group for the work of this trial. We listened to the comments made by participants and members of the public and have made some changes to the design of our trial as a result of this feedback.

This video gives a brief overview of the NeuroSAFE Fresh Frozen section analysis procedure to check for positive surgical margins.